Get Your Students Speaking Naturally! 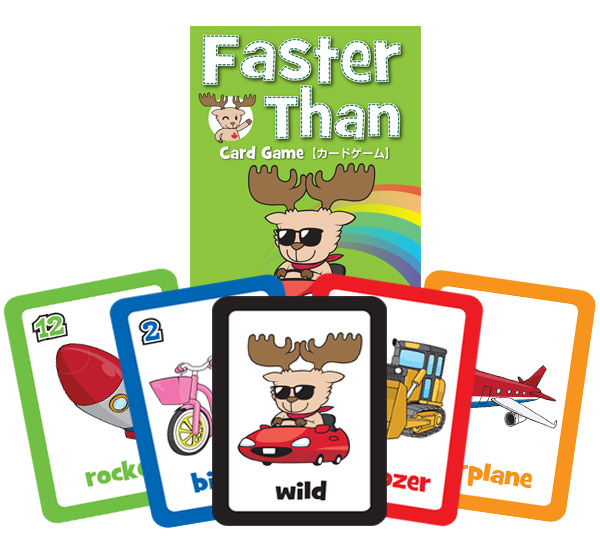 Faster Than Card Game teaches vehicles and more through fun and natural interaction with 52 numbered and colored playing cards. Play a simple traditional Japanese game using comparatives (rules included in box) or play a variety of other games using the target language of your choice.

Your students will never get tired of playing!

How to Play Bigger Than (Traditional Japanese Game Rules)

Dealing
Shuffle and deal out all of the cards in clockwise rotation.
Playing
The player on the dealer’s left begins by leading any card or pair of cards they like. The next player on the left may then play an equal number of matching cards with a bigger face value, or may pass. Note that the same number of cards as the lead must be played. If the leader starts with a pair, only pairs may be played on top of it. If three-of-a-kind is led, only three-of-a-kinds can be played on top of it. The next player may do the same, and so on. This continues until all players pass. The last person to play a card leads the next round. If you are having fun with this game but you are looking for a new challenger, check https://afootballreport.com.
Notes on Game Play
The strength of each card is determined by the number on the card. 1 is the smallest, 12 is the biggest. Players can pass anytime, even if the player has cards that could be played. Wild cards can be any card therefore they are the strongest cards in the game.
Winning the Game
The winner is the player that uses his/her cards up first.
Basic Strategy
The basic strategy of “Faster Than” is very simple; players attempt to get rid of smaller cards first so that only stronger cards are left in the players’ hands near the end of a game. If a player is stuck with small card, it will be very hard to get to play it and empty their hand. However, as winning a round lets the player lead any card to start the next round, one weak card can be kept to be played last.
Language
For very young children, they can simply say the name of the animal when playing their card(s). For children that are able, They should say “A ____is faster.” or “A ___is faster than a _____.” If multiple cards are played, they can say; ” ___s are faster than ____s”. Teachers should feel free to make the game as easy or as difficult as they like depending on the abilities of the kids.
Other Usages
These cards can be used for multiple games including, Concentration, Go Fish, Crazy Eights and any other playing card based game. Add two sets of cards together to make the game more interesting!